What environments do our taps suit?

Often the last thing we think about until we really need them, what a tap can add to a room is usually not something we would consider at all. It’s just a way to dispense water, after all. Even so, it is well worth taking the time to consider what impact a small detail, such as commercial taps, can have on the area when choosing for your wash-room – for example, a tap with a cross-head, while perfectly suitable for most places, might not be the best choice in a washroom where ease of use is the preferred norm. And let us not forget, happiness in the work-place often comes from a good environment to work in… yes, something as simple as a tap can contribute to creating a comfortable space for that necessary two-minute break.

We supply a wide range of different styles of taps, which are suitable for all commercial environments, including office spaces, schools, hospitals, leisure facilities and other industrial buildings. You may decide to opt for a different style of commercial sink taps depending on which market sectoryou are in and the type of people who are going to be using your facilities. Whether you’re looking for something luxurious, seeking to mitigate your impact on water waste, or perhaps both, we have what you need, from the familiar old-fashioned, to the futuristic high-tech. 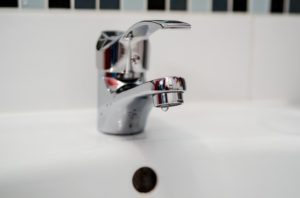 Here at The Sanitaryware Supplies Company, we offer a range of lever taps in either single hot and cold taps, or as mixer taps, whatever suits you best. The simple but elegant design of the taps makes them suitable for use in all facilities and ensures that they will match with any style and décor.

Opting for self-closing taps is a great way of conserving water, which is why they are a popular option amongst busy commercial and public environments where water wastage, and therefore bills, could be high. Self-closing taps are one of the first choices for the environmentally-conscious.

Self-closing taps have a timed water flow which ensures that the ideal amount of water to wash your hands is provided, eliminating the risk of visitors leaving the tap on and therefore preventing flooding. These are perfect for use in schools!

Much like self-closing taps, sensor taps aim to save water and energy. The advanced design of electronic taps means that they have a low water flow rate, meaning that they use much less water than traditional basin taps. These taps also have a timed water flow which takes away any risk of flooding and water wastage. This makes them the ideal candidate for use as commercial taps in a public place which could be busy or quiet depending on the time of day.

Aside from the fact that these taps are energy efficient, they are also very easy to use. The fact that they are no-touch makes them easy for everyone to use, including the elderly and those with reduced mobility, and are ideal for sterile environments such as hospitals.

Mixer taps are becoming more common in washroom facilities as they are much more practical than separate hot and cold commercial sink taps. Not only do they look better as they are more streamlined and take up less space, they are also much easier to use. You can opt for a range of different styles, including sensor mixer taps and lever mixer taps.

When your staff or visitors are using your facilities, health and safety is a very important consideration. By opting for commercial mixer taps, you can ensure that the temperature of the water can be controlled to avoid scalding. Each individual can choose how hot or cold they would like the water to be, which means that they are more likely to be happy with the facilities you are providing.

If you’re looking for luxury commercial taps, wall-mounted taps may be the best option for you as they are subtle and exclusive in that not many commercial washrooms have them. Wall-mounted taps give you more space in your facility, which can be used to hold soap and other toiletries, which in turn increases the efficiency of the room. Add the ‘wow’ factor with our wall-mounted taps, which are available in self closing and electronic versions

What makes our taps different?

As a reputable sanitaryware manufacturer and supplier with over 35 years experience in the industry, here at The Sanitaryware Supplies Company we only offer high quality commercial taps for any facility. We ensure that the taps we sell are WRAS approved, so you have peace of mind that they are approved to the standards required to meet Water Bye laws in the UK.

We’re ready to hear your ideas, offer our advice and work with you to find the perfect tap to suit your needs. Sold separately or as part of a package with products, we can advise what suits you best.

Our range includes and exceeds the previously mentioned styles of commercial sink taps, and is constantly being added to , so if you’re looking for quality supplies for your commercial washroom, get in contact with our friendly team today on 01157 842769.

Get in touch with us today.
Select your currency
GBP Pound sterling
EUR Euro